VA loan limits for 2015 will match conventional loan limit levels (see below) as set by the Federal Housing Finance Agency (FHFA). Due to this change the maximum loan limit will decrease for 84 counties in 14 states; however the loan limit increase announced by the FHFA for conventional transactions will also apply to VA loans. 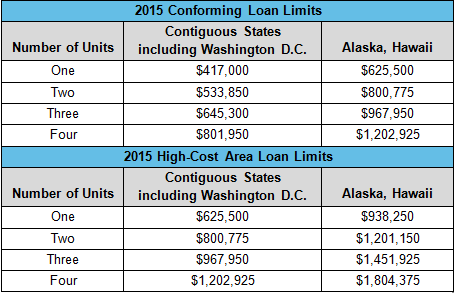 In the event the 2015 county limit is lower than the 2014 limit, VA will honor the 2014 limit for loans in process subject to the following:

The 2015 maximum loan limits by county may be viewed at VA Loan Limits and selecting “2015 Loan Limits”.